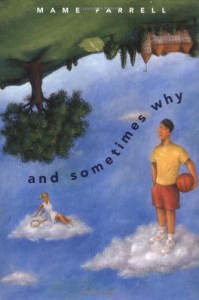 This is a somewhat bland tale of friendship between two eighth graders that I doubt I would have finished had I not been listening to it on audio. It wasn’t bad, just one those “meh” reads. Chris and Jack have been inseparable ever since their first meeting in the first grade. Jack is from “the right side of the tracks” but never fit in with the snotty country club set, while Chris is a girl who lives with her dad in a cozy apartment above a hair salon. This apparently means she’s “from the wrong side of the tracks” as she states just like an old fogie at some point in the book. Maybe it’s just me or the kids I know, but when I spout out some old fart saying like that, I’m called out on it and they always look at me like I’m some oddity so hearing these kids talk like older folks pulled me out of the book more than a time or two.

Chris and Jack are growing up and Jack is starting to have issues with Chris’s legs and the fact that so many guys are now noticing them. He fears losing her friendship and is having a difficult time seeing her with other guys and reacts with emotion, causing a rift between them. Making matters worse, Jack’s parents have just separated and he fears his dad is having an affair. The story follows a few months in Jack’s mildly tumultuous life as he sorts through all of these changes. If you toss away the old speak, it’s all realistic but not earth shattering stuff to get all excited about. My own childhood at this age was much more traumatic so I’m probably not being fair to this novel. If you’re really bored and looking for a mild tale about friendship you may love it.