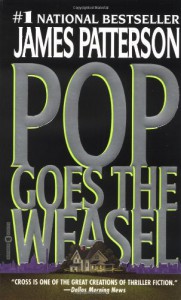 This dark & gritty unabridged audiobook was the perfect choice for a dreary, misty morning ride to work. This was my first glimpse into the world of Alex Cross and once I finished this book I realized I've been missing out on some potentially excellent reads. Most hardboiled mysteries are too dry for my tastes and my mind starts drifting away but this one hooked me from the beginning with its attention to characterization and the emotional affects of crime on the victims left behind.

The story, though grueling, moves along at a fast pace and held my attention throughout. Police Officer Alex Cross is a compelling and sympathetic character chasing down one of the evilest serial killers I've encountered in quite a while. The killer fancies himself as "Death" in a role playing game he and his three cronies call "The Four Horsemen". "Death" takes his role far too seriously and is a truly revolting, heartless, selfish and sadistic character. My only complaint is the plot twist that occurs on Disk 4 which was very predictable due to the author's overuse of happy adjectives in the previous chapters.

The book only slowed down a bit for me during the trial but I've never been a fan of court room drama anyway and the ending left me wanting more (which is a good thing if there's a sequel -- not so good if this is the end!). All in all I'm thrilled to discover a new author with a considerable backlist to devour.
Tweet