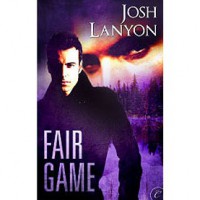 I read this book a while back and it thought it was fantastic. You can grab it now while it's on sale for .99 over at Amazon.

4 1/2 stars Elliot is a former FBI agent, injured on the job, and now reluctantly working as history professor due to his bum knee. He doesn’t realize just how much he misses his old life until he gets involved in a missing person investigation and finds himself consultant to the FBI and his ex-lover Tucker. Their relationship simply ended when Elliot was injured and neither has ever resolved it. Seeing each other is drudging up uncomfortable memories for Elliot, who insists the two had nothing in common anyway. Except sex. Mindblowing sex. Elliot really misses the sex. Tucker apparently was very good at it.

This is a mystery with solid writing and strong sense of place. The romance is there, slowly building in the background but it’s first and foremost an intriguing murder mystery. I wasn’t expecting that because I’ve probably been reading way too many m/m erotica novels. I’ve gotten comfy with the main focus being (often) 100% on the relationship, the sexing and the conflicts within that relationship. Fair Game follows its own path and was a nice surprise.

Tucker doesn’t welcome Elliot’s interference on the case and isn’t at all shy about letting him know it. Working together is difficult for them; they have unresolved, unsaid stuff between them. Stuff neither wants to talk about. Both are resentful and have feelings of abandonment but talking would mean facing their feelings and these guys aren’t the type to have a big emotional row.

Elliot and Tucker seem like men most of us know (albeit probably much better looking). They think like guys, they act like guys and it was such a nice change of pace for me, having read more than my fair share of books that featured gay men who were, ahem, so fem and saccharine sweet I felt as if I were reading a fairy tale or someone’s idea of a dream man. Fair Game seemed less of a fantasy and more of a reality about two tough, stubborn men who have a connection and whether they’re willing to admit it or not want each other but can’t communicate. Instead they brood and let things simmer until it all spills out in the form of hot kisses and near sex. It was so real it was touching. Seriously, who doesn’t know a man afraid to talk about what he’s feeling and would much prefer to clam up and get naked?

I’m not a big mystery girl but this one never had me daydreaming or wishing I was reading something, anything, else. It was interesting; the characters well developed and there were more than enough suspects to keep me guessing and, yeah, the romance was lovely. If I didn’t have so many other books to read right now and a crazy busy weekend I would snatch up the rest of Lanyon’s work and hide away in my room until I’d read myself into a stupor.