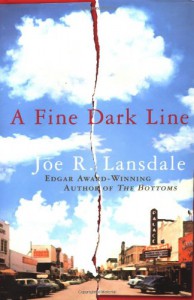 This Lansdale novel, unlike the other Lansdale novels I’ve read, is told from the point of view of a thirteen year old boy named Stanley. It’s not filled with the off-the-rails cursing and crazy gore that I expect when reading a work from this guy but it still kept my attention. Set in a small town in Texas in 1958, it makes sense that Stanley’s “voice” is still quite innocent. I don’t think you could get away with that sort of innocence today, what with the internet and MTV and their marathon showings of pregnant teens and spoiled skater bois and all but it works here.

Stanley’s parents recently purchased the local drive-in and having made only one friend, Stan’s a bit of a lonely kid. He has an older sister but all they do is bicker. One summer day he and his trusty dog Nub unearth a box filled with love letters written long ago. This gets his curiosity going and he does some snooping, along with the ancient often drunken projectionist, and learns that a house use to stand where he found the box and that a young girl died inside when it burned to the ground. He then discovers another young girl was tragically murdered on the same night. Certain the two events are tied together; he spends his summer determined to find out the truth, befriending some colorful characters along the way, and disturbing things better off left alone.

I’m a sucker for coming of age tales and this is a damn good one. It drags a little here and there but the characters kept me coming back for more. I’ll never claim to be some big mystery wiz and though I guessed one important aspect of the mystery the rest of it kept me guessing. The characters are interesting and realistic (always most important to me) and the tale is scary, funny, heartwarming and compelling with a very well done sense of place. The twists, turns and chills come in the most unexpected places. Reading this I felt like I was tagging along with Stan, Nub and Buster during a long lazy summer. It’s good classic stuff from Mr. Lansdale hisownself.