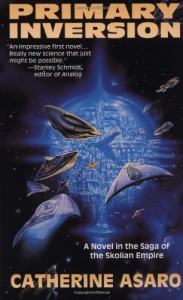 I read this over a decade ago & re-listened to it on audio while cleaning the house, exercising, cooking & driving to and from work and I didn't find it nearly as enthralling as I did the first time around. Maybe because I'd read it before or maybe because now I'm an oldish crab? I don't know, either way I kept wishing it would hurry up and end because I wanted to listen to something else. It's strange, I remembered this book as being emotionally draining and the torture scenes grueling but this time around I thought they were very sparse and didn't have that jarring effect they once did and I felt detached from the characters for the most part. Of course I could be confusing this with another of the Asaro books I read a decade ago.

October 2010 Just located my original 1998 review and I gave this five stars.

I liked Sauscony immediately. Her wry sense of humor, her leadership abilities and her emotional strength awed me and despite being full of high tech hardware she was easy to like and so very human. Her emotional battles were as gripping as the ones on the battlefield. It's that blend of emotional turmoil, politics, genuine, fully fleshed out characters that you can care about and the exciting action packed plot that made this such a gripping read for me. I've got to admit though that some of the technical aspects of the book did go way over my head but I enjoyed the book so very much and highly recommend it.
Tweet