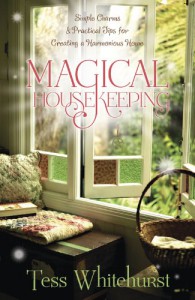 This book caught my eye in the latest Llewellyn catalog. So far it's only reiterated things I already learned in similar books such as "Clear Your Clutter with Feng Shui" and Scott Cunningham's books but the author has an easy to read style and her methods are much more accessible than some of the other magical books out there. For newbies looking to make their home a happier place this is a good starting point and I really enjoyed the fact that she included a recipe from one of my favorite vegan authors. Whitehurst seems to steer clear of words such as "pagan" and is going more for a feng shui vibe mishmashed with several other traditions but the space clearing and empowerment stuff is similar to things you'll read in many a Llewellyn pagan 101 themed book. So if you're familiar with decluttering methods (love it, need it, or lose it), space clearing, very basic feng shui, visualization, etc. you probably won't learn anything new in at least the first third of this book. Still it seems a good jumping off point changing old habits and creating new, healthier ones.

I'm finding myself inspired to do some of these things. I've been very much a slacker, especially when it comes to performing a space clearing and am going to pick up some sage, dust (ugh!) and cleanse my crystals and see if I can change the stale energy in my home. I haven't been sleeping well and can't seem to shut off the worry button even when I know it serves no purpose so I'm thinking this book came to my attention as a wake the hell up call.

I'm going to keep this book for a bit and try out some of the enchantments as they aren't so complicated that I'll never get around to performing them. My only complaint with the book was the brevity in which she discusses some of her topics. I felt, especially, that the animal, herb and incense section got the short end of the stick. There are plenty of other books that go into enormous detail about such things and I'd recommend Scott Cunningham's books over this one. But this is a nice overall grouping of magical workings to get you started (or going again) and it doesn't adhere to one particular belief system for those eclectic minded.
Tweet