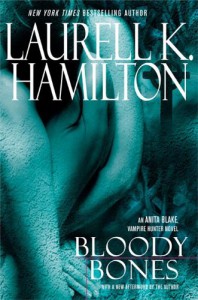 Bloody Bones is one of the more brutal outings in this series. A huge portion of the book follows Anita Blake as she’s working and this time she’s called in on a case that is particularly gruesome. Three teen boys are brutally slain, a young teen girl is left for dead and a young boy has been kidnapped, possibly by a deviant sexual predator of a vampire who enjoys toying with children. It’s dark and painful to read the grief instilled within some of these pages.

Anita must also raise an entire graveyard of the dead for a client with only Larry the apprentice as backup. Even she realizes this may too much to handle and is struggling with how she’s going to do it without a human sacrifice. As if all of this weren’t enough to handle, she has to deal with a fey being that may or may not be a bad guy. The only thing she knows for sure is that he’s screwing up her latest assignment and is using magic when he shouldn’t be.

I really loved this format for the books. I’m so PO’d that it has been screwed with so much in later books. Anyway, as we all know Anita is still dating Richard and Jean Claude. And, surprise, surprise she has to call in Jean Claude for assistance on her vampire case. Once he arrives in his triple poofy armed shirt and spiffy cravat the story takes a little detour from hard boiled vampire executioner and zombie raising mayhem to Anita fending off sexy Jean Claude’s flirtations and dealing with vampire politics and protocol and a new master who uses Anita’s past to heart-breaking effect.

This book here is Jean Claude’s book, all you Richard and Edward fans have been warned. It’s pretty easy to see which guy Anita is really digging here. The “monster” line begins to get real fuzzy for Anita and the sexuality is ramped up a notch but I’m still okay with that because there is a plot to this book and it moves. I was always entertained and never bored, irritated or lost. Hamilton excels at keeping all of these plot threads going without confusing her reader all the while giving us tantalizing new tidbits about her main characters. The only thing missing is the darker edged humor that I enjoyed in the first few books. Bloody Bones was so intense it really would have benefited from some well placed sarcasm and dark humor.