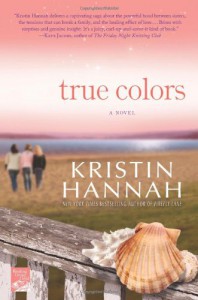 I listened to this as an unabridged audio book. Kristin Hannah has written some charming historical romances in the past which is why I was tempted to pick this up but I’m really under whelmed with this women’s fiction/chick lit/soap opera venture. Where’s the charm? Never mind that, where’s the love? All I’m reading here is bitterness and jealousy and awkward relationships. It’s making me edgy and impatient.

The book is about three sisters whose mom died of cancer when they were very young teens/pre-teens. Supposedly they are super close, or that’s what the author keeps saying anyway. Winona is the oldest, Aurora the middle one and Vivi Anne is the young beautiful one favored by gruff old dad. Winona grows up to be a successful attorney but she is very insecure and an emotional eater and has been unable to snag a man. When Luke, a hunk from her past calls her up and asks her to meet him to discuss some legal business over a drink she instantly hopes and wishes that he wants to date her. Desperate, much? She then agonizes over her looks, insists that Aurora pretty her up and then imagines him gushing about his wife and kiddies and on and on. Blech, is she 27 or 17? But, alas, it’s all for naught because the moment Luke spies gorgeous Vivi Anne he’s head over heels and Winona starts to seethe with jealousy and dreams up ways they’ll break up so she can comfort Luke. She refuses to tell Vivi Anne about her crush on Luke and then starts being a royal bitch to everyone (including employees) because those two are dating. Emotionally stunted, much?

The middle sister, Aurora, seems to be here to act as a peace-keeper between the beauty and the bitter sister. She’s married to a doctor whom she apparently finds boring and has little children who are apparently never around. I’ve heard people say that kids should be seen and not heard but these kids weren’t even seen. It was weird since Aurora was in the story so much whenever someone needed advice or prettying up. I began to wonder if she had some dark secret and had locked her kids in the basement or sold them for cash or something.

Vivi Anne is probably the only character I somewhat warmed up to but only because she had a soft spot for horses, especially wounded ones, and because she was a bit wild herself. She’s not so smart in the relationship department and was too eager to please others however. This gets her into a real nasty bind as the book goes along. She makes some excruciatingly stupid choices but she’s the youngest so at least it made more sense than Winona’s endless pining and whining over Luke, the blandest man in the land.

The whole dynamic of this relationship just wasn’t working for me and none of these characters were likable enough to latch on to. The entire first part of the book annoyed me and though these three supposedly have a close relationship I didn’t feel it. I understand sibling rivalry and all but the way this relationship was written was just not believable. There’s also some weird-ass dialogue that bugged me. I can’t remember it all but this gem really stuck out. When Luke first calls and asks Winona to meet for a drink she responds with, “How about 4:00? I hear that’s Miller time?” Honestly, who says things like that outside of a commercial? It’s no wonder this woman can’t get a date.

Later on a major plot development happens that only cements my previous dislike for Winona and helps me feel compassion towards Vivi Anne even though she is too weak of a character to fully embrace. The twist here is a total soap opera event but it does make the book a bit more interesting. It’s here that the book did fully grab my attention but not because of the tangled relationship between the sisters but because of a troubled young teen boy and his journal entries. He was a great character and Hannah is a writer who can touch the emotions. It’s just such a shame that she wasted so much space on a character as utterly awful as Winona and gave the third sister, Aurora, such the shaft. The end of the book where Winona’s love life was resolved seemed very contrived and not believable at all. It should have ended with an epilogue where she was a bitter old cat lady. Now that I would have believed.

I’ll read Kristin Hannah again because she can write an emotionally involving story but this one won’t be getting a reread.