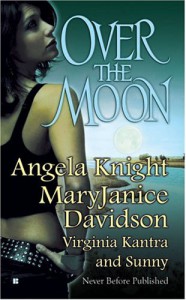 I bought this for my local book group. I've always been a fan of werewolf stories and was hoping this book wouldn't bore me to death like so many of the romances I've recently read.

The first story is by Angela Knight. When a female werewolf in heat runs away from an arranged marriage to a brutish alpha wolf, she lands pretty much on top of a police officer who just happens to be a werewolf himself. Imagine the odds of that? She needs a baby in order to maintain her independence from the alpha wolf but the reasons are so convoluted that I'm not even going to attempt to explain. I could see where this was going a mile away and really who couldn't? But it held my attention and there's a lot to be said for that.

The second story by Virginia Kantra seems to be a sequel to a story in an anthology released quite a few years ago which I never read. It's about a young lady who decides to go on an extended hike in the wilderness and ends up stumbling across the sidhe. I felt lost throughout most of it. The basis of the story relies on the previous story and all the references to the previous tale frustrated and confused me instead of clearing things up. The atmosphere is very well done but in the end I still felt confused and the love story didn't make all that much sense. This one needed to be longer or packaged with its prequel, if you ask me.

The pace picks up with MaryJanice Davidson's tale "Driftwood", an unlikely love story between a beta werewolf and a bossy female vampire who wants nothing to do with him. The two hook-up when he finds her stuck in a hole on the beach and attempts a rescue. The results are silly, sarcastic and a lot of fun.

The final story by new author known only as "Sunny" is giving me the same issues as the Kantra story. I feel like I've been thrown into a sequel of a book I haven't read. Are author's intentionally trying to make me worry if I have Mad Cow disease? Is this some sort of backlash for all of my bad reviews? Maybe I deserve it. Anyway, the story is about some sort of alien/paranormal/fatally attractive half-blood Queen and her two male lovers who are little more than Jean-Claude/Richard clones right down to their descriptions. It's almost as if the author took Laurell K. Hamilton's characters and wrote them a little fanfic piece in which they're a happy threesome. I'm kind of annoyed so far but will finish the story if only to complain some more about it here.

Well, I'm nearly finished with Sunny's story and despite the fact that it is a blatant rip-off of Laurell K. Hamilton's work as well Anne Bishop's "Blood" books, I kind of liked it. The characters were decently drawn and their motivation well explained despite the fact that the driving force of the story is pretty much sex for power, for healing, for kicks . . . I'll probably search out the other two books in this series. Just out of curiosity, of course.
Tweet