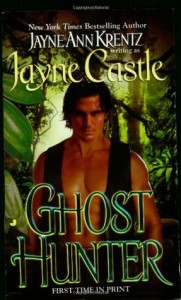 I listened to this book on audio. Naturally, "Ghost Hunter" turns out to be a new book that is part of a long running series and I'm left feeling confused and clueless right off the bat. Aren't there any author's out there in romanceland who can write a decent STANDALONE novel anymore? This is getting ridiculous.

Many, many moons ago I did read some of the earlier books in this series. Zinnia and Amaryllis I think they were called, and gave up in frustration and utter disappointment. They were well reviewed and supposed to be outstanding paranormal/futuristic novels but to me they were repetitive, silly and utterly boring. And this was before I was a burned out grouch! Castle's other-world was basically earth peopled with earthlings who had some paranormal talents and used words like coff-tea. Sadly I am not making this up.

This book, Ghost Hunter, is set in the same world only it's part of the sub-series referred to as "Dust Bunnies" by fans. It took me awhile to figure out why the book was dedicated to the "dust bunnies of the world". I figured the author was giving all of us poor shlubs who can't afford a housekeeper (because we're too busy buying books) a little nudge but it turns out dust bunnies are characters. This one features a critter named Rose who, if you ask me, has more personality than the heroine which isn't saying much considering Rose doesn't speak.

The story begins when a young lady named Elly gets ticked off at her fiance whom she believes has been courting her only to improve his own station in life. She has high connections via her daddy to some important society and he's a ghost hunter who could move on up in the world with those family ties. She's all hot and bothered because he's really hot and never even kissed her or anything and doesn't think he likes her, if you know what I mean. It's a bit junior high-ish. Then there's some talk about a duel that makes her really mad (sorry my mind was drifting a lot here) and Elly breaks off the engagement. Ghost-hunting dude (GHD for short) just sits there like a lovely lump and doesn't say a word to defend himself. She leaves town in a huff and several months later realizes she needs GHD's help to search for a friend who has gone missing. And, oh the luck, he just happens to be in town. GHD agrees to help her because, wow, she looks super hot in her short skirt and he's been holding out hope that she'll change her mind about the marriage. Awww, gorgeous, desperate, sweet and dumb as a rock. Where are these guys in real life?

Honestly, I would've given up on this long ago if I weren't listening to it on audio. It's boring and it’s reminding me why I've disliked Krentz novels in the past. I liked the dustbunnies but everything else about this romance was blah and forgettable. And if I heard Castle's word of the week, "Rez", one more time I thought I'd lose what's left of my mind! Examples: he rezzed the lock, he rezzed a ghost, his erection was rezzed and ready to go -- okay so I might have made up that last one but I think you get the drift. . .