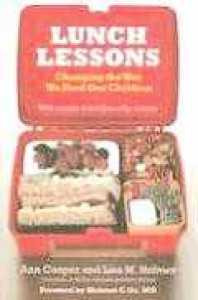 I've been following Chef Ann via her informative blog and her weekly podcast and think she is doing some very important work in regards to waking up the country about children's dietary habits and was thrilled when I received the ARC in the mail.

I became interested in the subject when my 2nd grade daughter began developing migraines that made her so ill she'd turn as pale as a ghost, get nauseous, and be unable to do much of anything but take a nap in a dark room until it passed. They were so bad at one point that she seemed to be spending more time in bed or in the school nurse office than in class. After many attempted fixes including limited activity, stress, ear-plugs, her migraines are under control without medication. The main culprit appeared to be the food I was feeding her. Particularly processed snacks like Cheetos & Doritos which are laden with MSG, a major migraine trigger, I soon discovered. I always thought MSG was something used only as a filler in Chinese takeout. Boy, was I mistaken. Aspartame is another biggie used in everything from low-cal puddings to bubble gum. I have since changed our entire dietary habits excluding nearly all of the processed junk (and was that ever painful!) with the exception of organic cookies, snacks and the limited few items that don't contain MSG, *natural* flavor, yeast extract and all of the other names the big food processors "hide" MSG under. And I was stunned to see just how much of this stuff was being served in school.

Lunch Lessons begins by outlining everything that is wrong with our current food system. It clearly explains what children should be eating and explains why children need to stay away from additives, corn syrup, fast food, trans fat, etc. Did you know that children born in 2000 and after who are following the current trend of the fast food, prepared food nation, are facing a shorter life span than their parents? I didn't but it makes since with obesity and diabetes on the rise in the young.

There is a chapter devoted to outlining the caloric needs of a growing child, which food groups are actually necessary for correct development and a helpful chart explaining portion sizes and the number of servings to eat per day based upon the child's age. The book is filled with tools to help anyone learn to change their eating habits and lifestyle (and it is a huge lifestyle change) and I'd bet even those without children would find it a very useful reference and jumping off point for dietary change.

The middle section of the book tells about several schools systems who bravely changed the menu by eliminating pre-packaged processed food and brought in whole foods from local farmers. The stories, especially the comments from the children, are inspiring and hopeful. What surprised me the most were the positive social experiences these children enjoyed while tending to a garden and preparing their healthy meals.

The recipe section is filled with lunch options I've never before considered. I tend to get stuck in a rut with whole grain bread, natural PB&J, turkey cold-cuts, etc. and I'm not sure if my kids will go for some of the more radical options like couscous but I'm going to give it a shot. I never thought of packing home baked mac & cheese or chicken pot pie but those are two faves I'm betting will get them more excited about lunch.

The only negative, and it's hopefully present only in the review copy, is the fact the flow of the text is constantly interrupted by boxes of other information. It's a bit of a pain to be all wrapped up in an idea and then to have to turn a page to get to the end of the article and then have to back track to read the info. in the boxes (similar to reading a magazine).

This is a book that will remain in personal collection and one I'm betting I'm going to be picking up on a weekly basis as I prepare my meals.

Update: I made the Chicken Pot Pie & the potato (minus the chive) biscuits. It took me a mere 2 1/2 hours (she says very sarcastically) what with all the chopping and cooking but my son LOVED it. He had two helpings and ate it again for dinner the 2nd night. It came out more like a hearty chicken soup with biscuits on top rather than the crusty frozen pot pies I used to "bake" but the kids didn't seem to mind and it was so cheap to make! Next time I'm skipping the potato biscuits and dropping some dumplings in instead.