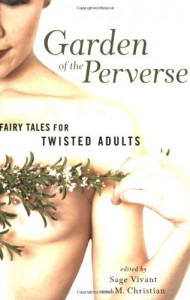 I picked this collection up from paperbackswap awhile ago.

How Taiki Found His Wings This story starts the book off with an adorably whimsical tale of a young bird-man who is afraid to fly. All of his previous attempts have ended in failure and he fears he will forever be bound to his little branch and never get to experience the mating dance. Turns out all he needed was a little incentive in the form of a beautiful bird-woman who teases and taunts him until he is burning for her and faces his fears. I loved this sweet, sexy little story and hope the rest are in this vein.

Sept. 09: Put aside for the moment to read bookrings.

November 09: Picked up again last night and read a few stories but none of them were as enchanting as the first one.

Beauty Thrasher Is about a magical flail. When used it literally beats the ugly out of people leaving them gorgeous for a day, so gorgeous all they want to do is have sex. An enterprising woman takes advantage of it but learns that you can't beat the ugly out of everyone, some folks are plain ugly through and through!

The Satyr This story was just ewwww. A young maiden wants to learn about sex before her marriage and demands a mythical creature to school her. The Satyr a beast who is half man, half horse shows up and this short story describes their brief, rather gross interlude.

The Woman Who Married A Wolf is fairy-tale in feel in the beginning but then meanders off into nonsense. It was so poorly written and bizarre it couldn't hold my attention.

Sappenschwester This story is very modern and didn't fit the fairytale-like theme of the rest of the book but it was one of the better ones so far. Guess you just can't have it all. Sappenschwester is a young college student who meets a slightly older, more experienced woman online. They are going to meet in real life for the first time and she feels inadequate because she's still an innocent and asks for help from her coed's who are all more than happy to oblige. And that's it, really. I had a difficult time finding the fantasy connection here and that was bothersome. The closest I can get is a very minor Goldilock's connection.

Jaded is as unsubtle as a story gets. The character name says it all. He's a spoiled guy who has seen and experienced it all until he discovers a room of pleasures beyond his wildest imaginings with a girl named "Surrender" and there the story ends.

The Pipe of Thorns This was dull and only caught my interest at the very end. It is about yet another sex-addicted young guy who meets the woman of his dreams but fears he'll bore of even her too and go back to his old womanizing ways. She takes care of the problem for him in nicely twisted and fitting way . . .

Fences I skimmed this one about a spoiled prince with a long tongue. For whatever reason it bored me and couldn't keep my attention.

She Comes Stars This was a creative fantasy about a mere mortal who becomes enslaved by a Goddess who humiliates and sexually tortures him. Darker than most of the others and good stuff, too bad it wasn't longer.

Mirror Mirror On the Wall Another story with a mean streak. This time it's about a man with money and power who uses and sexually abuses people. His newest hire, however, may be more than she appears . . .

The Jealous King & The Generous Lover This story was a bit unoriginal and felt rushed. King takes a beauty for a wife but because she's sweet and doesn't produce an heir quickly enough the evil King gets a niggling thought that she's up to no good with other men and curses her. He makes her ugly, crippled, mute and thoroughly unattractive to other men and then tosses her aside. Despite all of the abuse she retains her inner compassion and helps a young man who has a true heart that breaks the curse. His "magic wand" fixes everything and they live happily ever after. The end.

Virgin Ear This one starts out in a very bizarre manner but turns out to be one of the more inventive and oddly sweet stories in the book. Gina has a very strange secret, she can hear body parts speak and boy do those man-parts ever have a lot to say. . .

The Prince of Byzantium This one is about an ugly duckling (more like a plain Jane) who is being forced into a loveless marriage by her parents but instead finds her prince charming in the magical land of gold, magic and her imagination. This one was ok, eh, nothing special.

The Unicorn and the Strumpet Now this is what I waded through most of the stories to find. A beautiful young maiden defies the rules and conventions of her time, gives in to her lustful feelings and lies with a handsome young man (and then his friends) and ruins herself in the process. One day these young fellows decide that they're going to capture themselves a unicorn with the help of the former maiden's innocent, obedient and still virginal sister. The unicorn however has other plans. This one was leagues better than "The Satyr" which, without spoiling too much, has something in common. It has a real fairy-tale feel and is just a lovely story. If all of the stories in this book were as good as this I would have finished the book in one sitting.

The Maiden of Grand Proportions The final story in the book is about a woman learning to love herself for who she is in a world where bodies altered by plastic surgery are the only bodies considered beautiful. She finds love but only after she learns to love herself.
Tweet