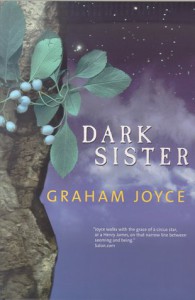 This is a book meant to be read in one sitting, preferably on a dark dreary night while the wind is howling through all of the cracks & crevices of old windows. Though I have the old, drafty windows, unfortunately, I no longer have the luxury of reading anything in one sitting and was forced to settle for half hour reading spurts whenever I could steal away from real life. Despite the pick-up and put-down method of my reading I was able to fall into the book all over again each time I began anew.

Like the previous Graham Joyce book I read “The Tooth Fairy”, the characters in Dark Sister are realistic, imperfect people with many flaws. No one here is perfect through and through.

Maggie is an engrossing character caught in a stifling marriage. She’s a stay-at-home mom who longs for a little more than keeping house and getting criticized by husband Alex when things are not up to his standards. Alex, an insecure turd, is the type who would lock her in a tower and throw away the key if he could get away with it and refuses to allow her to return to school. When the unhappy couple discover an old journal filled with herbal lore Maggie becomes a little obsessed with learning its secrets. As Maggie delves deeper into the world of magic and makes two new friends, a lonely herbalist and an eccentric, crusty old lady, who become part of her journey, her marriage continues to go down the tubes.

I found Maggie’s magical discoveries quite interesting but it’s the increasing destruction of her family life that adds an emotionally grueling level to the story.

Maggie is a much more sympathetic character than Alex but she also has her share of faults as well (but, hmmm, are they all her fault?). In anger, she says a few well deserved horribly awful things to Alex but I cringed because her young children were listening and she knew it. She also forgets her responsibilities (i.e., her children) one time too many when her other world begins to consume her and she doesn’t seem overly bothered by the fact. These missteps added to the realism of her character. I’m so sick of flawless characters and these people, even when unlikable, were a nice smack of reality and change of pace.

I also enjoyed the depiction of Maggie’s youngest son. He looks like a cherubic angel but acts like a real kid. He’s a genuine, tantrum throwing brat who reacts to the increasing turmoil within his family with fear and fits. I found this very sad and yet another eloquently written layer of the story.

As the story progresses and Maggie’s dabbling with magic has some eye-opening results (love the revenge on Alex) but also awakens her “dark sister” and the story becomes even more intense.
Tweet