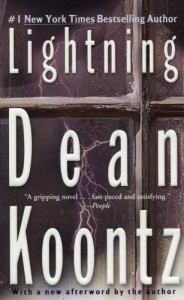 I originally read this way back when it was released and I was still a teen but have held on to it ever since. I'm going to finally set it free but will reread it first to see what I think now that I'm a wee bit older ;)

Comments on the reread:
As is typical of many of Koontz novels, this one starts out with mysterious men conducting experiments of a nefarious nature. A baby named Laura is born, her mother dies in childbirth and she's raised by her loving dad and watched over by a mysterious "guardian angel", a big blond man who saves her life on more than one occasion. Also, making an appearance is a man who wants both the guardian angel and Laura dead.

The first part of the book is spent getting to know Laura and grieving with her when her world falls apart. The thing that struck me most about this book was the length of time Koontz was allowed to develop his main characters. This is something I find incredibly lacking with many of the horror novels by newer authors I've attempted to read lately (Bryan Smith comes to mind). Koontz completely immerses you in Laura's world and allows you to care deeply for her and to care about the people she loves. As much as character study as it is a fast paced time-travel, suspense filled read, Lightning managed to capture my attention throughout most of it (and it was long!). My attention only began to wane near the end of the book when the adventure bit and war talk took center stage. I'm glad I reread this before setting it free and hope someone else finds it as interesting as I did.