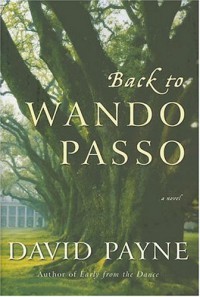 I borrowed this audiobook from the library. I am not enjoying it at all but continue to torture myself by refusing to shut the darn thing off until the last word is read. It's about a selfish, self-absorbed, washed-up, bigoted man who returns home to Wando Passo (his estranged wife's family estate) after he has the epiphany that he still loves his wife. In reality, I think he just didn't know what else to do and had run out of willing women to bed. For some bizarre reason she takes him back even though she doesn't appear to like him very much because he cheated, drank and never provided for them. Maybe she did it for the little kids they share? If it were me I would've let the door hit him square in a*s on the way out but I'm mean like that. Anyway, here he comes all expecting to be greeted with open arms but things don't work out quite that way. They fight, he embarrasses himself with his racial slurs against his wife's best male friend, and they fight some more. The book then flashes back to the wife's ancestors (sorry, I'm horrid with names) who were living at Wando Passo during racial tensions and civil unrest. Here we meet Abigail (or Addi?), a naive new bride who realizes the man she married (without knowing) is quite a beastly man and not in the "cool, he's a werewolf" kind of plot twist either. He's a bigot, jealous of his half black brother and thoroughly unlikable. She's struggling with her mistake and submits to him out of propriety but is filled with dread. The book then alternates back and forth between these two depressing storylines. There is no reprieve and still I continue on . . .

Later: Well, I'm almost glad I plodded on because the characters are rounded out quite a bit more and aren't as one dimensional as they seemed at the beginning of the book. Ran (the washed up loser dad) suffers from bipolar and is off his meds which explains much of his behavior. It is Claire, his wife, who actually becomes a bit more of an unlikable character. Well, it's a toss up really because both of these people do things that annoyed me. A murder mystery and some voodoo/hoodoo/witchcraft is thrown in to liven things up which works for me because all of the daily drama was becoming a bore. Back in the past Addie struggles with life as a plantation owner and faces many ethical dilemmas, including her growing feelings for her husband's half brother. It's pretty engrossing but she too makes choices that annoy me.

I should also note that there is too large section of this book written in another language (Spanish, I think) without a translation. It was difficult to make heads or tails of the scenes because it's been over 20 years since I took Spanish.