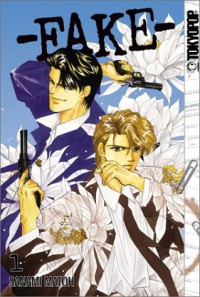 This is an illustrated story that reads back to front about two young male officers recently partnered up who are painfully attracted to each other. Dee is out and doesn't care who knows it (though he claims he's "bi") while Ryo is much more innocent and confused by his feelings. With Dee in the lead, he creates some cute, sexy, comical situations and steals a kiss from Ryo whenever and wherever he can. The two must fight drug lords and deal with young delinquents. The dialogue between Dee & Ryo is fun which more than makes up for the often silly and inept police work and all of the sleep-overs for whatever reason. The only thing annoying me quite a bit is the silly fighting between Dee and a young street kid named Bikky. It seems too juvenile for a grown man who is supposed to be an officer of the law and reads more like a parody . . . I'll definitely track down more of these. So fun.