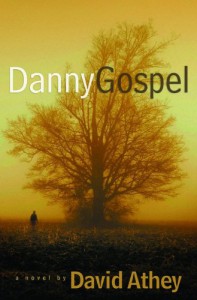 I'm not sure how I ended up with this book because it's unlike most of the books I tend to read. Danny is a young man who in his younger days sang with his family and they became pretty well known. Sadly, Danny's teen years met with tragedy and now he's an unsatisfied and unhappy mailman who longs for a happy life on a farm and a loving wife. Despite the pain in his past he has strong faith in God, is an optimist, rather naively innocent sort of guy who believes the majority of the world is good. His surviving brother, however, holds the opposite view and the two are somewhat estranged.

One day Danny is kissed by a beautiful woman in an almost dream-like sequence and is convinced she is the woman his heart longs to meet. Danny is a bit of a dreamer and it isn't made clear if this is all real or made up in his mind. After a misadventure he sets out on a road trip and meets some oddball characters. But no matter where he ends up he always makes friends and manages to fit in. With no money and little in the way of luck he finds his way and his faith never wavers. This was a very quirky, character based read and was very enjoyable. It is not overly preachy and the character reminded me a lot of Dean Koontz's Odd Thomas. The ending was unexpected but fit well with the rest of the story. This was a very emotional book filled with lots of pain but also inspiring in that a good attitude and faith can get you through the toughest of times.
Tweet