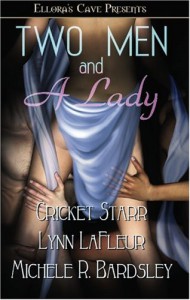 The first story "Lady's Choice" by Cricket Starr is a space opera of sorts. Gehon & Jackson are very good friends and both Zelion's which apparently means they can only procreate with one particular woman, their "true". And once they've found this woman and mated with her they can never become aroused by another woman again. So if their "true" shuns them they're crap out of luck. When they meet Lija, who is just out for a night of fun, both men realize she is their "true". They both bed her and she must decide who she's going to keep (or not). The plot was lame, it was set in space to work out what there was of a plot but the non-existent world building irritated me. There was so little room for characterization which made the eroticism rather "eh, who cares?". It heated up a bit near the end but I still could've cared less and the rest of the story was a bit dull. I may or may not read the rest. Depends on my tolerance level for self torture this week . . .

"And Best Friend Makes Three" by Lynn LaFleur
This story was much better written than the previous one and though the plot was thin, gorgeous hunk decides to give his love a very special present in the form of a night of pleasure with him and his best friend, it was enjoyable and the love between the couple was shown not just told.

"Saving Sara" by Michele R. Bardsley
This one is much darker in tone than the two before it. It features white magic, ghosts and a woman recovering from a soul destroying rape. It was well written but the rape memories were too dark for me and I just couldn't finish it.
Tweet