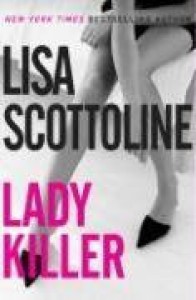 Mary DiNunzio is an attorney who is dismayed when former mean girl Trish walks into her office and demands her help. Apparently her boyfriend (who just so happens to be Mary's former love) has become abusive and she fears for her life and has nowhere to turn. Mary makes a few suggestions but Trish refuses police intervention because her boyfriend is in the mob and will kill her. What she expects Mary to do then escapes me . . . but she stomps out of Mary's office in a huff and soon after disappears. Now everyone from Mary's neighborhood is ticked off at her because "she didn't do anything" and Mary is forced into spending time with Trish's friends who tormented her as a teen and have grown into annoying women who cause Mary no end of trouble.

Mysteries aren't my favorite genre but this one was peopled with well written characters who were interesting if not always likable (lots of shallow, self-centered women in this book). There was a little humor, a little romance and enough twists and turns and secrets to hold my attention.
Tweet