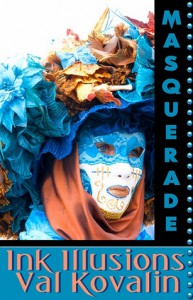 Aaron, who is openly gay, is sharing a home with his good friend Rosemary and helping to raise her young daughter Belinda who he has grown to love like his own. Belinda doesn’t know her real dad, Travis, who has been in prison for most of her young life and Rosemary intends to keep it that way. Travis has just been released from prison and Rosemary fears he will search them out and/or kidnap Belinda. When Rosemary is invited to a Mardi Gras masked event thrown by Travis’s parents she sends Aaron with instructions to ferret out any information.

Aaron attends the event but finds himself smitten with Travis, who is also gay, or possibly bi, and a surprisingly nice guy. The two share some intense chemistry but complications, many complications, ensue that force them to take things much slower than either anticipated. This slow burn fuels their lust and allows them to get to know each as friends before hopping into bed. This part of the story worked best for me. I love me a slow burn that pays off. Aaron’s relationship with Belinda also rang true and was very sweet. The big problem character for me was Rosemary. Her refusal to visit Travis in prison and her continued insistence that Travis would kidnap Belinda just didn’t seem to be based on anything but her own fears and that bothered me and made it difficult for me to sympathize with her. I guess I needed to see more reasons for her intense fear for it to ring true besides the one comment about her mom being a good for nothing junkie who died in prison. There is also a plot twist that occurs later in the story that was extremely frustrating and disappointing to me. I enjoy complicated and slightly impulsive characters but some of the choices made here just didn’t sit right.

With that said, I enjoyed the lovely relationship between Travis and Aaron, I adored cousin Karl and hope he finds a love to frolick with in that big water bed of his. The descriptive prose, especially during the Mardi Gras party, was wonderful. I would’ve rated this one higher if it weren’t quite so over-stuffed with its many different issues or had been long enough to fully flesh everything out.