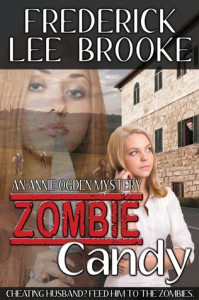 Zombie Candy makes for fun summertime reading but be warned this is not a typical zombie novel by any means. It features zombies, sort of, but there isn’t any brain gobbling and to say more would ruin it. It’s also not an amateur sleuthing novel even though the cover says “An Annie Ogden Mystery”and “Cheating Husband? Feed Him To The Zombies”. Because of this I was sort of expecting something along the lines of Stephanie Plum tussles with zombies. It’s an eye-catching cover and an amusing story but I can’t help but feel the cover perhaps is cashing in on a few trends that the story inside doesn’t fully deliver upon.

So what is Zombie Candy about then? At its heart it’s a story about a scorned woman who concocts an awesome and intricately planned revenge upon her serial cheating, zombie movie loving, insulting, pudge pinching, Russell Crow look-a-like husband. His name is Larry and he is a first class Asshole to Candace his long-suffering wife who made the mistake of giving up the love of her life to honor her promise to marry Larry. But Larry finally pushes Candace over the edge, and she enlists her best friend Annie Ogden, a brand new PI, to get hard proof of his infidelities – as if the black bra in his suitcase wasn’t proof enough . . .

This is a well written and zany book that zips along at a fast pace and has some funny moments. The main characters are slightly over-the-top but that’s the point. They are also decently developed which I totally appreciated. Candace and Annie are tight friends who have been through a lot of crap and come out stronger for it. I loved that. Candace starts the book overweight, insecure and beaten down by Larry’s constant insults but she transforms into a badass, demented, better version of herself by the end. I truly despised Larry through and through but I think I was supposed to otherwise the whole thing would’ve fallen flat. The author writes his character in such a way that I was able to see things through Larry’s eyes and I mostly understood why he couldn’t help being an insensitive prick. Some guys just are, you know? He also has a sex addiction and truly believes he is doing right by the leagues of women he bonks.

“They want it. I’m giving something they all want. I’m not a taker. I’m a giver.”

He’s delusional and narcissistic and this is why it is so gratifying to watch Candace’s plan unfold as she releases the wraith of her pent up fury upon him. It was a full on trip to crazy town and oh-so-cathartic.

I recommend it. It’s not my normal genre and Larry made me crazy but I enjoyed the heck out it!