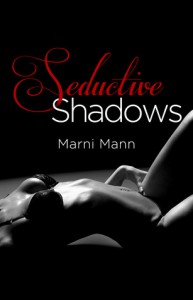 I’m a sucker for dark, gloomy novels and tormented characters. Combine that with a little deviant sexual behavior and you’ve got my attention.  Keeping it? Well, that’s the problem . . .

Seductive Shadows is part erotica, part personal journey and part thriller with a smidge of romance thrown in there too.  Charlie had a painful childhood. She grew up too fast, witnessed too much and now has a screwed up view on relationships and sex. I’m not going to go into everything but will just say that the author did a great job developing Charlie and I sympathized and understood her choices.

Charlie is a struggling to make a better life for herself. She’s a part-time art student, paying her own way and working her butt off to pay off her mother’s enormous debt. One night she is approached by a recruiter who offers her a job she’s unable to resist.  She knows upfront she’s going to get paid (a shit ton) in exchange for sex. She’s told she can leave whenever she wants and that she will be safe and protected and welcomed into a “family”. For a girl like Charlie this is a dream come true. She self-medicates with sex anyway and enjoys the attention, the release, the power and the anonymity of it all.

“Just because I was hired to provide pleasure, didn’t mean I couldn’t enjoy every moment of passion and every uninhibited deviant thought. I craved sex and attention. I needed it. I was turned on by the cameras that would point toward my bed, the lust that would be whispered in my ears, and playing out the fantasy that I would compose. The challenge would make my release so much sexier. ”

But, alas, nothing ever goes Charlie’s way for long. Soon after she takes on this sexy new job, she meets Cameron, a talented artist she admires and lusts after. He treats her with respect and appreciates her art and she starts falling a little in love. Here’s where the complications come in and boy are there some whoppers thrown at you in the last few chapters. Charlie is in a very dangerous and desperate situation because, shocker, the mysterious recruiter wasn’t exactly telling the truth  . . .

This book is a hard one to review. As erotica it’s pretty good, it’s sensual, slightly dirty (but not squicky) and a wee bit dangerous which is how I like my erotic books. As a personal journey type of story it works too, Charlie has a lot of crap to leave behind and still finds the will to make a better life for herself. That’s admirable. As a romance it doesn’t work for me but that’s only because we never get to know much about Cameron besides what Charlie feels for him. But it is Charlie’s story so I can’t fault the book for that. But as a thriller? Hell. No.

The best and worst thing about Charlie’s story is the fact that her inner torment, her longing for a real family and her grief were so well painted. Her pain was so intense that at times it felt suffocating. That poor girl needed a break from the doom and gloom and so did I.  There was very little joy or levity in the dialogue and story and I had to keep stopping because it was depressing the hell out of me. I usually dig this heavier stuff (Chase In Shadow, anyone?) but for some reason, either my bitchy, burned out mood (nah that can’t be it!) or the fact that I could only connect with Charlie and felt disconnected from everyone else, this book just wouldn’t go down easy. And then the WTF reveal arrives along with the unfinished ending and I was stunned in a really bad way. I actually clicked my next button at least ten times thinking something was wrong with my reader. Nope. Nothing wrong with my reader. The book was simply over and done, leaving some very important bits left swinging in the wind with no resolution (or not enough for me, at least). There is a sequel coming so I guess that’s the reason. Had I know that earlier I probably would’ve DNF’d this because it feels incomplete and this one was such a struggle to finish that I can’t see myself rushing to buy book #2.