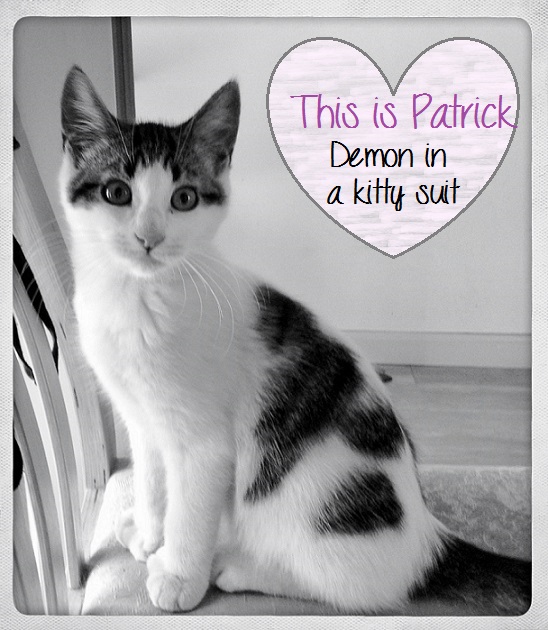 I kid you not. My daughter fostered this beast when he was a squirmy, half blind one week old pitiful little thing. He was a huge momma's boy and would not eat kitten food after all of his siblings were weaned. My daughter and I (mostly I because she's lazy) had to hand feed this baby so he would survive. We thought he was sweet and a little pathetic and we fell in love.

It was all a ruse.

Flashforward 9 months later. He is satan's spawn. I am sure of it. He terrorizes my other cats, snatches the two big dogs food right out of their bowls while they're eating and he has turned my home into one of those "minimalist" houses because nothing can stay on a shelf or counter without him knocking it to the floor (this is probably for the best since I had way too much crap anyway). He has also taken out my kitchen ceiling fan (don't ask it was a truly ridiculous series of events featuring Patrick, my husband and my son and ending with the fan hanging by a thin wire from the ceiling), he has eviscerated 3 laptop cords, 6 lightbulbs, 3 table lamps, and just this morning he managed to unzip my purse, fish out my Ipod cord and tear it into three pieces in the time it took me to make my coffee.  Grrrrrr. How do I stop this terror? I fear one day I'm going to come home to a house without power because he'll have severed something major. And if he eats through the cable and I miss Supernatural he may have to call up Lucifer and request a few more lives.

He's only 9 months old. I am terrified to think what damage he'll inflict on us (and my wallet) during his lifetime but he is cute and cuddly when he's sleeping . . .