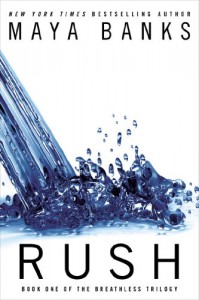 the alpha hole is very often confused with the alpha male. They have the same characteristics of the alpha male only they are assholes. The Alpha-hole always takes things too far. He often does and says unforgivable things, has a 'black out' temper, is possessive to the point of insulting, and never grovels. The alpha-hole is usually matched up with a nice doormat who'll take his shit with a smile.

Gabe the hero(?) is an alpha-hole. If you like that type of thing or are a forgiving sort you might be able to enjoy this book more than I did. If you don’t you should heed all warnings steering you away. I wish I had.

Many of my book friends warned me but I read it anyway. Unabridged on audio. In my car. Where there is no escape. I really enjoyed Never Seduce a Scot by this author and was holding out hope that everyone else was wrong. Deep down I sometimes like me an anti-hero. And like the sheeple I am I believed the reviews that said he gave good grovel at the end.

I wish I had DNF’d this because I didn’t enjoy any of it. By the end, I felt nothing at all besides a little lingering rage.

So here’s the gist. Mia has always been “forbidden fruit” but that didn’t stop Gabe from secretly wanting to take a bite. Now that she’s 24 and the fruit has ripened sufficiently Gabe decides it’s time to make his move on his best friend’s little sis. To hell with a lifetime of trust, friendship and important business ties. Gabe is 14 years her elder but the gap doesn’t seem quite so wide now. Though it might be when he’s done (ugh I’m sorry, this book has scarred me).  Anyway, he can’t hold out much longer and he’s a man who always gets what he wants.

Gabe is a billionaire businessman who has been publicly burned by his ex-wife and he won’t ever let it happen again.  Because of the public shaming where his kinks were revealed he has shut off his emotions and deals with his sexual needs the same way he deals with any business venture. Instead of putting up with messy emotional entanglements he writes up a contract that flat out says he will own Mia until he tires of her.  He coldly admits that he does this with all of his lovers. It’s nothing personal. Mia must give up her life and work for him as his, ahem, “personal assistant” doing whatever he wishes, mostly while out of her undie pants and she cannot tell her brother. Her brother has raised her and he is the one person she feels closest to in the whole wide world.

Sound sexy to you?

Mia thinks so. She signs the contract after asking very few questions and getting very vague answers.  He’s hot, he’s out of her league, he can have anyone and yet he wants her so she jumps at the chance to become a paid sex slave. Well, who wouldn’t, right?

Thus begins the border-line kinky sex and because there wasn’t any emotion tied to it I found it incredibly boring and started to tune out. During (or after?) their first time together I do believe I even heard him call her “little baggage” as in “get over here Little Baggage”.  Ooo, now that’s how you woo a lover. I was hoping with everything in me that it was my imagination because I was only half listening but then I clearly heard him say “Keep your fucking arms where I put them” so perhaps my brain wasn’t unfairly putting ugly words in his mouth.

FWIW, at least he shows his assholish tendencies from the get go and stays true to character. Mia is just a little too forgiving and a little too bland for me to get behind though.

Narration Notes: This book was narrated by Adam Paul.  His voice rarely strays from bland-monotony except when Gabe is really angry (because honestly Gabe is always angry) and then the tone changes to bland-angry. At times he reads the words as if he’s in a hurry to end this gig as quickly as he can,which was fine by me because I pretty much felt the same way.