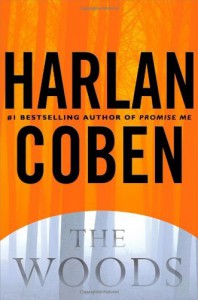 I accidentally started reading the abridged version of this book last month. It wasn’t very good and I thought it was me, my mood, something . . . Like most abridgments it left me confused, it moved too fast and it seemed to be missing the best parts. Characterization was not really there and Coben’s snarky humor was nary to be seen. After wasting four + hours I realized my stupid mistake and managed to track down the unabridged version at my library. It was read by the same narrator too, Scott Brick. Why on earth they would chop this version up and cut out some of the best parts is beyond me. If you’re getting this on audio be careful!

This unabridged version was much more readable but in all honesty it definitely wasn’t the best book I’ve read by this author.

I liked it well enough in the beginning. Paul “Cope” Copeland, the protagonist, was a decent enough fellow. He’s a single father who lost his wife to cancer and he works very hard as the county prosecutor (I think that’s right) putting bad folks away with his sidekick Muse (I liked Muse, she was a tough girl who was good at her job). When they were busy finding evidence to nail a bunch of rich, entitled rapists, I was glued to the story. Even the bits that take place in the courtroom were interesting and I don’t usually enjoy courtroom dramatics. Unfortunately, at some point that plot drops off the planet for a while and the space is filled with an assortment of other sub-plots that made the book feel a little overstuffed. There’s a past mystery about Paul’s dead sister that’s come back to haunt him, an ex-flame that may or not be rekindled, then there’s a trusted and beloved relative who may be up to a little shady-ness and one of the rich boys daddies is having dirt dug up about Paul. There might’ve been even more going on but I started to tune out a little due to disinterest.

This book got a bit too tangled up by the end for me because there was just too much going on. I probably would’ve had a better time with the book if I hadn’t listened to as an audio. Then again I probably would’ve set it down and never picked it up again. The narration was good. Brick has a strong voice made for a hard-boiled mystery. The characterization is pretty good too but I found Paul a little too bland to carry the book (sorry but it’s true). He was a nice guy who stood up for the down-trodden wee man but he just wasn’t compelling enough to grab me and keep for the duration. There was some memorable humor though and it’s definitely worth a read if you enjoy this type of mystery/suspense.

Here’s Paul talking to a client and her shifty, stinky attorney:

“Oh I understand. They’re offering money if you recant. The sum has now reached a level where your attorney here, Mr. Who-Needs-A-Shower-When-There’s-Cologne, thinks it makes sense to do it.”

I looked at Muse. “Open a window, will you?”

“The window is open. Feel free to jump out.”

Hahahaha, I love some good snarky sarcasm and Coben does it just right (I just want more of it!).

Coben is a great writer, there’s no denying it, but The Woods just won’t go down as my most beloved of his work.