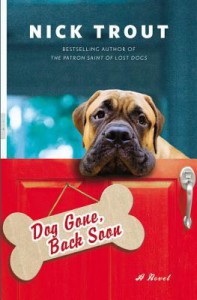 I was tempted to grab this from Netgalley when they sent me an email that included this cute cover. I hadn’t a clue about the plot or the writer or even the genre and especially that it was a SEQUEL to another book (grrrr) but I’m a sucker for cute dogs so here we are.

Cyrus is a veterinary pathologist who feels comfortable dealing with animals after they’re deceased. He enjoys solving medical mysteries and looking through a microscope. Cyrus does not have good people skills (more on that later) but at least he admits it early on. We all can’t be charming extroverts now, can we? But, for some reason which still confounds me after finishing this book, he has decided to run his recently deceased father’s failing veterinary clinic and is now forced to deal with pet parents and pets who still breathe. He and his dad were estranged and it would’ve been oh so very helpful to me if the reason was stated somewhere in this book. It wasn’t. It might’ve been stated in book one but I’m reviewing this one. Thus, with all of the little clues tossed about, I was forced to think that maybe Cyrus was just a jerk who left his sweet dad and never looked back and was returning out of some sense of guilt, perhaps? I was left to work up all sorts of scenarios in my head and none of them had me thinking kind thoughts about Cyrus.

This was a problem and Cyrus’s interactions with people throughout this novel didn’t have me changing my mind.

But I kept reading because when the book focused on the pets and their ailments and their attached and often kooky owners I couldn’t turn away. Those cases and visits were so interesting and I loved Cyrus’s relationship with a “doodle” dog that grew on him and took a piece of his heart. That was heart-warming and believable writing but his relationship with people, especially female people? Just no. Unfortunately all of the goodness is sandwiched between an annoying relationship/obsession Cyrus is having with a woman named Amy. This romance only shined a painful, migraine inducing light on all of Cyrus’s faults (namely jealousy and immaturity and being an all-around boob when it comes to women).

I’m giving this one a three because I enjoyed and despised it almost in equal measure and some passages were just so amusing like this one:

“Margo eases herself down, pinches both of Tallulah's doughy cheeks and plants a drawn-out kiss on the dog's snout like the creepy aunt children try to avoid at family outings.”