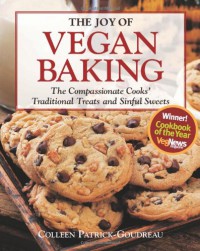 I have wanted this book since I first heard about it on Patrick-Goudreau's podcast and it has finally arrived.  I rarely read cookbooks from cover to cover and just jump on in which is what I'm doing here.

I had to make the Banana Chocolate Chip Muffins first. How could I not seeing as there were no crumpets in here? They were easy to make and tasted amazing and were almost good for me. The teenage boy ate most of them so they passed the test :) The recipe stated it makes 12. But I made over 18 both times I made these. The cooking time is stated between 20 & 30 mins. Mine were done at 20 so check them at the lowest end. If you're new to vegan cooking, this is an easy one to get you going. There are no strange ingredients or difficult techniques. Mashing the bananas was as difficult as it got. They're filed with chocolate chips and walnuts and have a strong banana flavor.

I'll continue to update with my hits and misses, flops and duds (I almost always find a few that I manage to screw up) as I work my way through the book. My only complaint thus far is that the author relies far too much on an egg replacement product instead of using an alternative such as flax seed or some such. I'm skipping those for now, perhaps forever, because I don't have that on hand and prefer using real food not processed egg replacements. This has me slightly annoyed. Annoyed enough to use another cookbook or the Internet for recipes most days.